If you are not living behind the moon, you have probably already heard of inbound marketing and it’s numerous benefits. The reason for it’s recent success is, that buyers simply do not want to be told what to buy but rather venture out themselves to find the most suitable product or service. That’s where inbound marketing shines in comparison to outbound marketing, which is basically all about reaching out and trying to make a sale. You know, cold calls, email blasts, TV ads, PPC.

As such, inbound marketing is often being praised for having a much lower lead acquisition cost compared to traditional outbound marketing such as PPC (pay per click) advertisement. That’s because the core of a successful inbound marketing is the creation of valuable, relevant content that attracts, educated and hopefully converts visitors.

Also, unlike PPC advertisement, your money doesn’t disappear in Google’s growing wallet but much rather becomes an asset in form of content. Once your PPC campaign stops, traffic stops. However, with inbound marketing, traffic will continue to grow and quality content often receives clicks months and even years after it’s been published. How cool is that?

Since we are all businessman, what we really care about are stats - lot’s of them!

I’ve taken the time to put together a spreadsheet that will help you calculate and compare the cost to acquire a lead via inbound marketing compared to PPC. Since you probably already have some data from a previous PPC campaign, simply enter your monthly spending and the average number of leads you have been able to acquire.

If you have no data to start with, you can still play around to find out about the worst and best case scenario. In any case, we usually expect the lead acquisition cost to drop by around 50%. 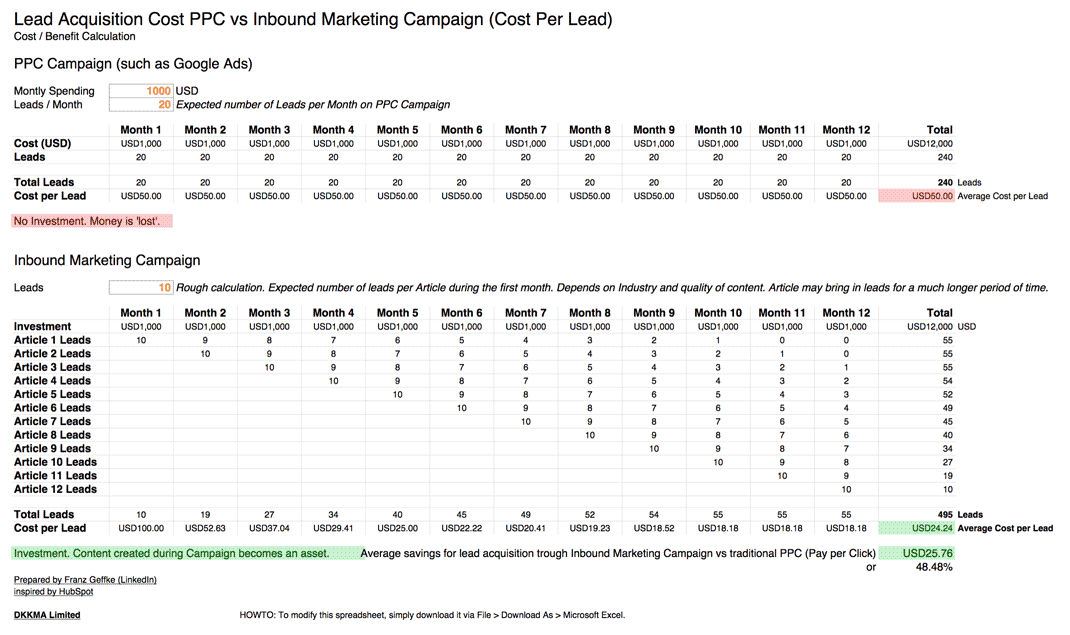 Is Facebook an effective marketing tool for your business?

3 Steps: How To Reach Your Twitter Target Audience At The Right Time

The 4 Stages of a Successful Inbound Marketing Campaign